Microsoft is in the race to make a comeback with its new browser Microsoft Edge.

Despite being an excellent browser, Edge struggles to gather the crowd for itself. However, the browser has both pros and cons that a user should be aware of.

Internet Explorer ruled the World Wide Web, soon after Firefox and Google Chrome replaced it. And now Microsoft is in the race to make a comeback with its new browser Microsoft Edge.

As per statistics, the browser Market is dominated by Google+ Chrome followed by Firefox and Internet Explorer with a market Share of 67.7%, 10.96%, and 6.97% respectively. Microsoft Edge stands at fifth position with 4.24% shares.

The tech giant Microsoft has launched few distinct Features such as Microsoft Touch that retains the critical element of the company that is the News Feed powered by Bing search engine, and it enables the users to customize their feeds. Secondly, the users can install Chrome extensions in Microsoft Edge.

Despite being an excellent browser, it struggles to gather the crowd for itself. However, the browser has both pros and cons that a user should be aware of. The advantages of Microsoft Edge includes:

The cons of Microsoft Edge includes:

In spite of such demerit, Microsoft has geared up to build itself on the same code that runs for Google Chrome. Microsoft had also developed “filters” and “ad blockers” to help the Android and IoS users hassle-free browsing whereas Google had earlier unfolded its ad- blocking in Chrome for Android but is not successful in preventing ads insignificant sites.

A Practical, Understandable Guide To Learning The eCommerce Solution For Successful... 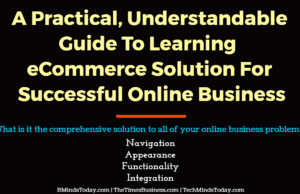 E-commerce-internet
What is it the comprehensive...
Load more